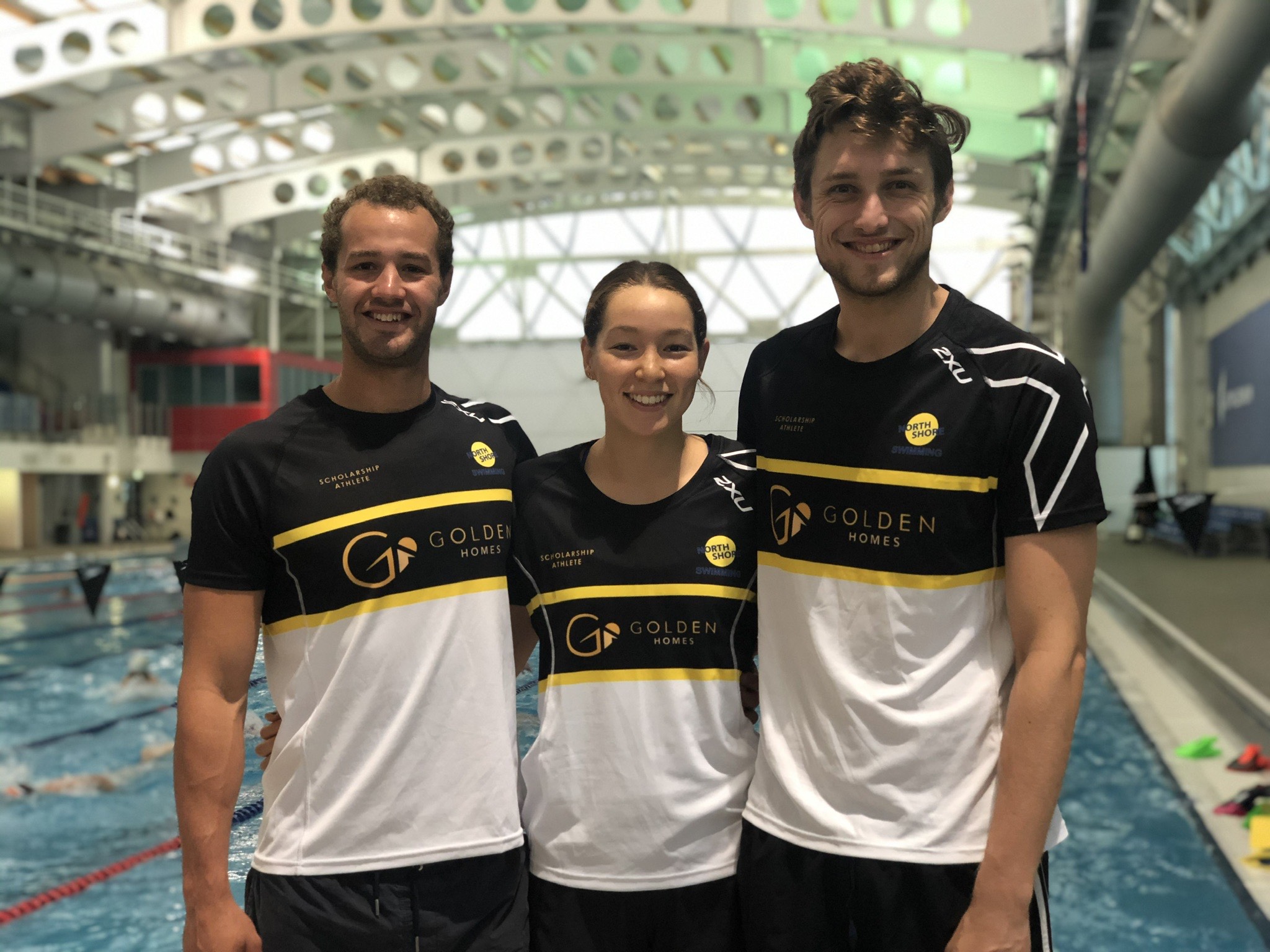 The trio are all elite members of the North Shore Swimming Club and have received highly sought-after scholarships from Golden Homes worth a combined value of $12,500 to help cover their swimming fees, membership fees and competition travel expenses. The package also includes TYR racing suits and a gym membership at AUT Millennium fitness centre.

Olympian and Commonwealth Games competitor Bradlee Ashby says he was “surprised and relieved” to hear he had been chosen as one of this year’s recipients.

“This scholarship from Golden Homes removes a major financial stress in my daily life – trying to find funding and extra help to fund my training. It enables me to carry on swimming at the highest possible level I can.”

Bradlee’s sole focus this year is on winning a medal at the Tokyo Olympics in July. The 24 year-old has already represented New Zealand at multiple FINA World Championships, won two bronze medals at the 2014 Junior Pan Pacs, and was the first Kiwi to go under 2 minutes in the 200m individual medley.

Fellow scholarship recipients Gina Galloway and Wilrich Coetzee are also gunning for places in this year’s Olympic squad. Trials will be held in March.

“It’s awesome getting to train hard and push our bodies out of our comfort zones daily, alongside a tight-knit senior squad at NSS who are also chasing this dream,” Gina explains. The 18 year-old has already competed in the 2018 Youth Olympic Games in Buenos Aires and broke the New Zealand record last year in the 100m backstroke.

“I’m truly grateful to be receiving a Golden Homes Scholarship this year. It has already had such a tremendous positive impact on my swimming training and racing. I’ve felt extremely motivated to achieve to the best of my ability in swimming and it has made the long commute to and from training all the more worth it - knowing I have the financial support of Golden Homes backing me.”

The annual scholarship programme was first established in 2012 and has now helped dozens of elite swimmers train on the North Shore at New Zealand’s most successful swim club.

Golden Homes CEO Shane Helms says the company recognises there can often be a disconnect between young talent and the resources required to take promising careers to the next level.

“Swimming is a tough competitive sport and involves gruelling training sessions several times a day. It’s expensive to compete at a national level, let alone on the international stage, and it can be nearly impossible to train well while working to pay your fees and travel expenses.”

Scholarship recipients are chosen annually on a performance basis and this year’s selection process was all the more important given the Tokyo Olympics are fast approaching.

“Bradlee, Gina and Wilrich are all fierce competitors with a tremendous work ethic. The dedication they have to put into their training schedule is astounding so we’re very proud to help them realise their full potential by supporting them financially behind the scenes. I’m sure 2020 will be a huge year for them all, and we’ll be cheering them on at next month’s Olympic trials.”